The 21st of March is the international day of forests. The awareness of protection of our forests is more actual than ever. In Greece our main importance is to take care of the trees and to keep them clean. The landscape is signed from the dark green color of olive trees which gives it a gentle soft look.

Apart from the carefulness of local nature, also in Greece, as everywhere around the world, today we should remind ourselves, that human beings, who are considered to be intelligent and able to think further- in difference to animals, are destroying the own place where they can live on: Nature earth. The tropical rainforests are not called “green lungs of earth” for the heck of it, without the rainforest we would all stop breathing.

What also takes ones breath away is the amount and speed in what the rainforest destruction marches further. Every day we loose about 137 species of animals, insects or plants, which is about 50.000 species per year. Forecasts say that 40% of the animal and plant species in Southeast Asia could be wiped out until 2021. The global deforestation was accelerated in the years around 1852. Until today between 7.5 million and 8 million km² of the mature tropical forests have been destroyed. Before 1947 the world was covered with about 15/16 million km². By 2030 predictions say that 80% of the forests will be lost.   In the years between 1960 and 1990 scientists claim that one fifth of the world´s tropical rainforests  was destroyed. 50 years ago the rainforests covered about 14% of the land surface and now it is only about 5-7%. All tropical forests will be gone by the middle of this century.   Reasons for the destruction of rainforests are:

Daily the destruction takes about 550.000.000 m² rainforest. Per year this is about 200.000km². Per minute it is about 35 big football pitches, so about half of a football pitch per second. The trees are cleared or get burned. 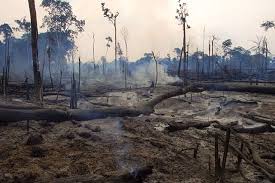